“We are living in the shameful age of Terrorism.” 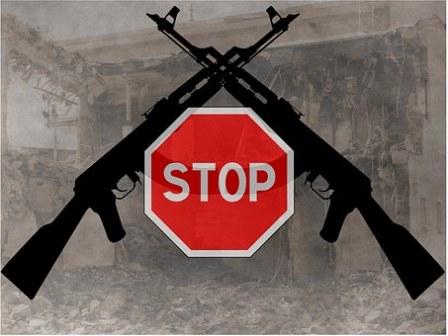 Terrorism means ‘to use terror-inspiring methods by terrorists to force a government or a community to make them agree to fulfil their demand. When a group of persons want to have an independent state, or some special right in constitution, they attack the established government with arms and ammunition. Such persons are called terrorists. They disturb the peace of the state and the people. They kill innocent persons and peace-loving community and thus create terror in the hearts of people.

In India, terrorism has prevailed in North-eastern India, in Nagaland, Mizoram and Tripura. In Jammu and Kashmir, Pakistan has been creating a great trouble and terror. This neighbouring country has been sending terrorists into our country for many years.

It has been supporting them with arms and ammunitions, money and training. The aim of this country is to annex Jammu and Kashmir through creating terror in our country. Thousands of lives of peace-loving people have been taken.

Pakistani intelligence agency ISI has spread its network in our country. Its main purpose is to spread terrorism on Indian soil. Our then Deputy Prime Minister and Home Minister, L.K. Adwani invited the world attention that ISI is a dangerous as Al-Queda and Jesh-i-Mohammad. India wants that the nations of the world should declare Pakistan a terrorist state.

A new form of terrorists is the Jehadi terrorists. They propagate the spread of fundamentalim of Islam. Attacks on Trade Centre of U.S.A. attack on Indian Parliament, attacks on Shrines Raghunath temple in Jammu, Akshardham in Gujrat were made by the Jehadi group of terrorists.

Conclusion : Terrorism is always harmful. It can destroy peace and prosperity of a country. The innocent and peace-loving people are killed. So it is the duty of every government to crush terrorism with an iron hand. An international conference should be held to deal with this problem of terror under the sponsorship of the United Nations.