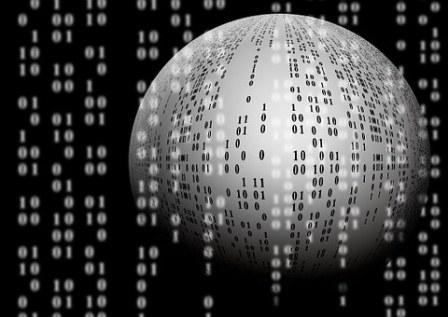 In case of computers we can say that Information is made into data, put into the computer where it is stored and processed as data, and then put out as data in some form that can be perceived as information. It can has following several forms.

Digital data describes electronic technology that generates, stores, and processes information in terms of 2 state : positive and non-positive. Positive is expressed or me number 1 and non-positive by the number 0. Thus, data transmitted number 0. Thus, data transmitted or stored with digital technology is expressed as a string of O’s and 1’s. Each of these state digits is referred to as a binary digit.

Prior to digital technology, electronic transmission was limited to analog conveys data as electronic signals of varying frequency or amplitude that are waves of a given frequency. Broadcast and phone transmission has conventions technology.

Digital technology is primarily used with new physical communications m satellite and fiber optic transmission. A modem is used to convert the digital your computer to analog signals for your phone line and to convert analog phone signal to digital information for your computer.

Analog is usually represented as a series of sine waves. The term originated because the modulation of the carrier wave is analogous to the fluctuations of the voice itself.

The term binary refers to a numbering scheme in which there are only two possible values for each digit : 0 and 1. The term also refers to any digital encoding/decoding system in which there are exactly two possible states. Examples are ASCII and Unicode. In digital data memory, storage, processing, and communications, the 0 and 1 values are sometimes called “low” and “high”, respectively.

The numbers from decimal 0 through 15 in decimal, binary, octal, and hexadecimal form are listed below.

In this case also the process is same as compared to hexadecimal and binary system. only difference to the other system is here the base is 8. Hexadecimal Numbers.

Hexadecimal numbers are extensively used in microprocessor work. To begin with, they are much shorter than binary numbers. This makes them easy to write. Furthermore, you can easily convert them to binary form whenever necessary.

The hexadecimal number system has a base of 16. This means that it has 16 digits, it represents all numbers.