Components of Computer System and its Function

We have studied the definition, classification and evolution of computers. Going over the definition once again a computer is a group of integrated parts organized to accept, store are process data and produce result under the direction of a stored program of instructions. The organization of the computer and its function is described below.

Now that you know the benefits of computers, let us move on to identifying each component of the personal computer with which you will be working during this course. 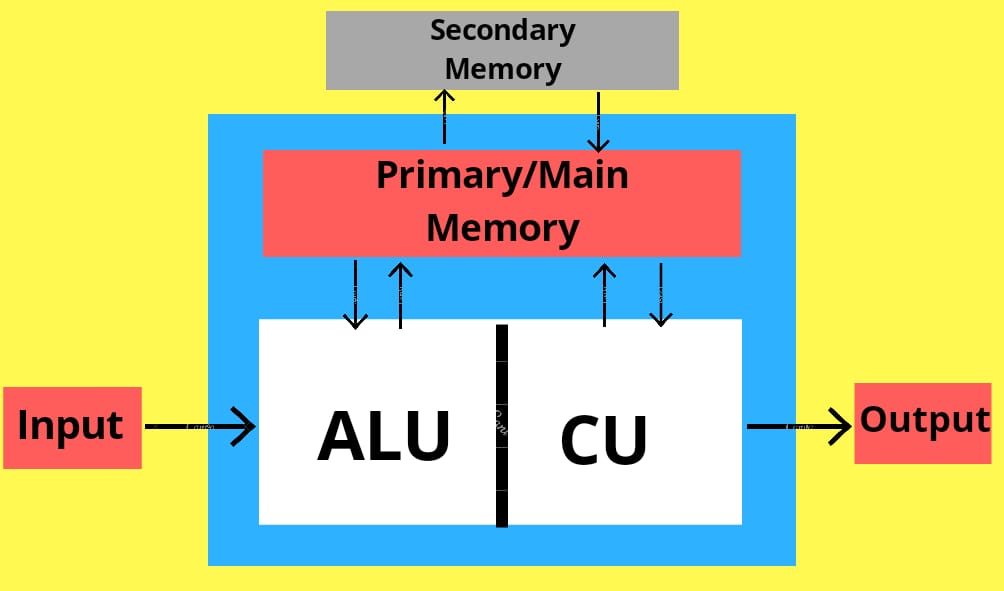 The computer system is made up of five fundamental units. The Central Processing Unit (CPU/Processor/Microprocessor), includes two special units, the Control Unit (CU) and the Arithmetical and Logical Unit (ALU).

The ALU is the brain of a computer system because it performs almost all the mathematical and logical operations on the data. The CU functions more like a “house master” or supervisor. It decides the sequence of operations for the system.
The memory module is used to store the information. Basically two types of memories are used in computers, namely ROM (Read Only Memory) and RAM (Random Access Memory). The two remaining units are the input and the output units.

Memory is the Computer’s working storage. It is one of the most important parts of the computer, as it determines the size and number of programs that can be simultaneously held within the computer as well as the amount of data that can be processed immediately. Primary memory is a fast Random Access Memory (RAM). It also stores the necessary programs of system software, which are required to execute user programs.

The main memory is directly addressed by the CPU. The memory of a computer can be thought of as ‘cells’. Each of these cells are further broken down into smaller parts known as bits. A bit means a binary digit i.e., either 0 or 1. A number of bits together are used to store data instructions by their combination. A bit is an elementary unit of the memory.

Since computer’s main memory is temporary, whereas secondary memory needed space to store data and information permanently for later use. The two most common secondary storage media are the floppy diskette and the hard disk.

The CPU controls the operations of a computer. It fetches the binary-coded instructions from the memory, decodes and identifies them and carries out the necessary actions. It contains, an Arithmetic Logic Unit (ALU) which carries out the mathematical and logical operations and address counter which is used to hold the address of the next instruction or data to be fetched from the memory; a general purpose register, used for temporary storage of binary data and a circuitry which generates the control bus signals.

The speed of the CPU is the number of operations that can be performed per second and directly depends on the clock rate input. The clock rate input is specified by the manufacturer and it is given in Mega Hertz (MHz). The performance of the CPU is calculated as the number of instructions executed per second. It is normally in millions and hence specified as mips (million instructions per second).

The word size depends upon the internal architecture of the CPU i.e., the data bus structure. For example, the Intel 8086 is a 16-bit microprocessor. The term 16-bits means that its Arithmetic Logic Unit, internal registers and most of its instructions are designed to work with 16-bits binary words. The 8086 has a 16-bits or 8-bits at a time. Word size can be of 8, 16, 32, 64, 96 bits etc.

Control unit is the central nervous system of the computer. It coordinates all the components of the computer hardware, i.e., primary memory, secondary memory, ALU and peripherals like I/O devices etc. CU (Control Unit) execute all the instructions one by one steps for the execution.

The ALU section is the section of computer where the actual arithmetic (=, -, *, /) and logic (<, >, < =, >=, <>) instructions are executed. During its ALU operations, the microprocessor holds its intermediate results in special purpose registers. These registers are storage areas, which are physically a part of the microprocessor chip. These are not accessible to the programmer.
This is a digital circuit that performs a set of arithmetic micro operations of a set of logic micro-operations. The ALU has a number of selection lines to select a particular micro-operation in the unit.

(i) Control and status registers

The control unit requires them. Some of the important registers are :

These are the registers accessible to an assembly language programmer and can be employed for general purpose. For example, Accumulator, temporary register etc., can be used by the programmer to store operands, intermediate result, or for any other similar operation. Some of the registers are dedicated registers i.e., segment pointers, index registers etc.

The bus is a collection of parallel signal lines through which data or messages can be transferred from one place to another in a circuit.

The address is the way a particular location in computer memory is referenced.

The input-output subsystem of a computer provides an efficient mode of communication between the central system and the outside environment. Programs and data must be entered into computer memory for processing and results obtained from computations must be recorded or displayed for the user.

A computer serves no useful purpose without the ability to receive information from an outside source and to transmit results in a meaningful form. The simplest and cheapest way to communicate with a computer is by means of a typewriter keyboard and printer. However, this is a very slow process and wastes computer time.

A central processor is an extremely fast device capable of performing operations at very high speed. When input and output information are transferred to the processor via a slow terminal, the processor will be idle most of the time while waiting for the information to arrive. To use a computer efficiently, a large amount of programs and data must be prepared in advance and entered into a storage medium such as magnetic tapes or disks. The information in the disk is then transferred into computer memory at a rapid rate.

Results of program should also be transferred into a high-speed storage, such as disk, from which they can be transferred later into a printer to provide a printed output of results. Devices that are under the direct control of the processor are said to be connected on-line.

These devices are designed to read information into or out of the memory unit upon command from the CPU and are considered to be part of the computer system. A device is off-line when it is operated independently of the computer. Off-line equipment devices are useful for preparing programs and data. For example, a keypunch is an off-line device where the operator prepared his program and data on punched cards.

A line printer may be operated off-line to print results of program from a magnetic tape. Input or output devices attached to the computer on-line or available off-line are called peripherals.

Among the most common peripherals are card readers and punches, paper-tape reader and punches, keyboards, printers, plotters, and display devices.